A new safety recall has been announced by Whirlpool for several glass cooktop models. The models covered by the Whirlpool cooktop recall use touch controls and may have the potential to turn on spontaneously. If it’s possible that you purchased one of these cooktops, follow our guide on what steps you should take.

This recall was announced on August 28, 2019, after the manufacturer received several reports of malfunctions from consumers. There’s obvious cause for concern if a Whirlpool cooktop turns on by itself, but a free replacement program is already underway. Use the information below to determine if your model is covered under the glass cooktop recall.

There have been 133 reports of Whirlpool touch control cooktops turning on by themselves according to the US Consumer Product Safety Commission. This issue poses potential hazards for fire and burns, but thankfully there haven’t been any serious injuries or property damage as a result.

There’s still a question as to what exactly is causing the cooktops to malfunction, but Whirlpool isn’t wasting any time in acting. They recommend if you suspect your model may be affected to turn off the power at the circuit breaker until you’re sure it’s safe to use. 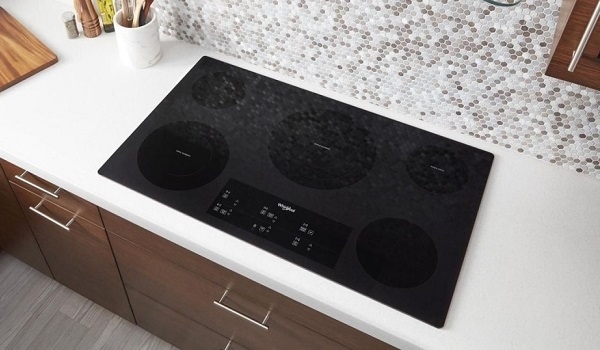 Models Affected by the Recall

Not only are some Whirlpool-branded models included in the recall, but also several models under subsidiary brand names. If you own a newer JennAir or KitchenAid cooktop with touch controls, your models may also be affected.

All told, about 26,300 cooktops were sold with the potential for this defect, along with another 3,000 throughout Canada and Mexico. They were sold between March 2017 and August 2019 at major retailers like Lowes and Home Depot, as well as online.

To find out if your model has been recalled, locate the unit’s model number. It should be printed on the bottom side of your cooktop. Write it down and compare it to our list below to see if your model number starts with:

How to Report a Defective Unit

If your cooktop model number matches one listed above, shut off the power at the circuit breaker if you haven’t already. Then call the Whirlpool cooktop recall hotline at 888-900-7897 between 8 am – 8 pm Monday through Friday. You can also submit your recall request online, and Whirlpool will contact you regarding your free replacement.

It’s unfortunate when appliance recalls are necessary, but Whirlpool is taking every step they can to keep their customers safe and resolve the problem quickly. And don’t forget, if you even need a problem solved quickly for any other model, call the cooktop repair service specialists at Best Service Company.